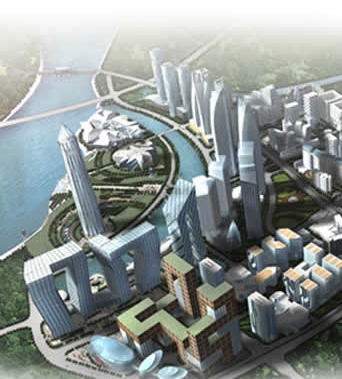 The picture shown here is that of the proposed Gujarat International Finance Tec-City (GIFT) , which is being designed as a hub for the global finance services industry. GIFT city promises to be a Central Business Hub, not just for India but also for the rest of the world. Connectivity, infrastructure and transportation access have been integrated into the design of the city. An attractive pricing strategy is also being developed to ensure that it is a fraction of the cost that is ordinarily incurred in other Indian and global finance cities. When completed, GIFT city will be at or above par with presently acknowledged global financial centers such as Shinjuku (Tokyo), Lujiazui (Shanghai), La Defense (Paris) and Dockyards (London). Size-wise too, at over 75 million sq. feet of office space, it is almost twice the size of Shinjuku, Luijiazui, La Defense and Dockyards combined!

The site is located on the bank of river Sabarmati, about 8 kms from Gandhinagar, the capital city of the industrial Indian state of Gujarat and around 12kms from Ahmedabad International Airport, the state’s commercial capital. GIFT will have easy access from all directions through 4 – 6 lane state and national highways.

The project, is being developed by the Gujarat Finance City Development Company Ltd, a 50:50 joint venture between the Gujarat government and Infrastructure Leasing & Financial Services Ltd (IL&FS) as a Public-Private partnership. GIFT is planned to become India’s first tall Central Business District project to support India’s booming financial services market which is expected to employ 10 million people by 2020. Unlike Mumbai, the present Indian financial capital, the GIFT city will have all the facilities that Mumbai is still developing: comprehensive infrastructure, power, verticalized office space, and a well designed, planned and expandable urban form. GIFT being quite close to Mumbai also works in it’s favour as the connectivity ensures that mutually beneficial development occurs between the two metros. It will house over a million people with millions more commuting there daily.

The scale of GIFT city is massive with 31 tall buildings and over 75 million sq. feet of office space,— the tallest being the signature Diamond Tower, 400m in height with 87 floors; another 40 buildings with more than 50 floors and many more with 24 plus floors.   In addition there will be an artificial island, integrated mass transit and dedicated expressways, residential townships, and dedicated power supply.

The entire project is not only fully approved but already completely sold out due to demand. Construction will begin later this year.


Inspired by the boom cities of China, the city is being masterplanned by East China Architectural Design & Research Institute ECADI, which is responsible for planning much of Shanghai, and Fairwood Consultants India, one of India’s largest and fastest growing consulting firms.

GIFT is designed as an extremely environmentally friendly development that will have the lowest per capita energy consumption of any Indian metro. It will have an impressive green area covering 65% of the total land, mainly becasue of the high percentage of skyscrapers. In addition, the area long the Sabarmati River’s banks will be developed into a riverfront recreational area, complementing the riverfront developments planned for Ahmedabad.

The project will also boast a museum, large conference center and gardens on the man made Fortune Island, where Diamond Tower is located. In addition to expressway linkages, GIFT will also boast underground arterial road, as well as MRTS/LRTS/BRTS connections and abundant parking.

The construction of phase 1 began in March 2008 and consists of the 400m Diamond Tower and the core CBD of GIFT, comprising a total of 25.8 million sq ft. It is expected to be completed by 2010.  Two more phases will then be rolled out for an eventual 2020 completion date.

On Oct 2, 2014, NetIndian reported that a new World Trade Center would be set up in GIFT City and would be completed within 4 years. According to the news report from the Times of India on October 18, 2014 the Bangalore based Brigade Group will develop 1.1 million sq.ft. of built up area.

All pictures in this article are courtesy ECADI Architects and GIFT

For more information on buildings/projects designed/executed completed in Gujarat in India, go to: