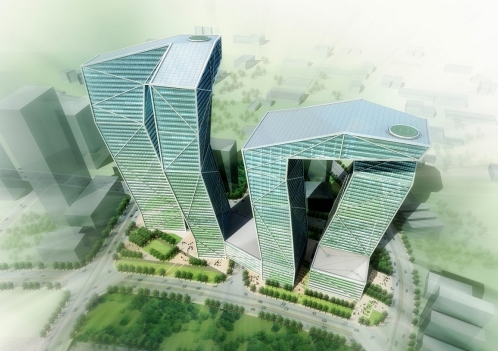 UNCATEGORIZED
December 9, 2009July 19, 2016 admin 0 Comments
The picture shown below is that of the proposed 54-storey Naga Towers coming up in India’s largest greenfield megaproject, the Gujarat International Finance Tech-City. As the name suggests, they are inspired by the Indian cultural symbol, the ‘Naga’ which is the sanskrit word for the hooded cobra snake. The snakelike design is evident  and according to ECADI architects, “the springing and leaping action of the snake is reflected in the form of the buildings in a symbolic indication of awareness and vitality.” The inspiration doesn’t end there, as the Naga “concept of duality and contradiction is represented in the double motif that eventually join to make one building.” 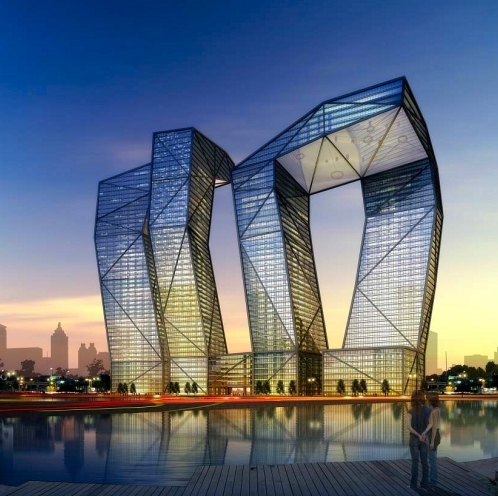 A worm’s eye-view of Naga Towers in Gift City, Gujarat

Before I describe the Naga towers, its necessary to give some information on the GIFT project.The picture shown below is that of the proposed Gujarat International Finance Tec-City (GIFT) on the banks of the Sabramati river, which will be one of the world’s largest and most modern financial hubs. The site is located at Gandhinagar, the capital city of the industrial Indian state of Gujarat and near the state’s commercial capital, Ahmedabad. In addition it’s strong proximity and infrastructure connectivity with Mumbai ensures that mutually beneficial development occurs between the two metros.When completed, GIFT city will be at or above par with presently acknowledged global financial centers such as Shinjuku (Tokyo), Lujiazui (Shanghai), La Defense (Paris) and Dockyards (London). Size-wise too, at over 75 million sq. feet of office space, it is almost twice the size of Shinjuku, Luijiazui, La Defense and Dockyards combined!

The scale of GIFT is singularly massive, unparalleled in the world except for a handfull of Dubai megaprojects. GIFT-City will have 312 tall buildings — the tallest being the signature Diamond Tower with 87 floors; another 40 buildings with more than 50 floors and many more with 24 plus floors of height. The entire project is not only fully approved but already completely sold out due to the high demand as it is estimated that India’s booming financial services market will employ 10 million people by 2020. Construction will begin later this year.

For more information on GIFT as a whole, check out GIFT CITY.


The GIFT city is being masterplanned by East China Architectural Design & Research Institute ECADI, which is responsible for planning much of Shanghai, and Fairwood Consultants India, one of India’s largest and fastest growing consulting firms. The Naga towers are the architects’ interpretation of a very important cultural and religious symbol of India, the ‘Naga’ commonly known as the King Cobra snake. This serpent God is worshipped in many places in India and so has  religious value.

WHY WAS THE NAGA SYMBOL USED IN THE GIFT PROJECT?

Noting the tremendous “recall value of the Naga which is an important part of popular indian culture”, the designers of GIFT decided that a modern interpretation on this ancient symbol would befit such a far-reaching project.

In Indian and Southeast Asian architecture, the statue of the Naga is placed flanking the entryways of a city, the temple and the sanctum sanctorum of the temple, symbolically guarding the approach to a higher spiritual truth. Similarly,the Naga Towers are directly situated on the Dream River waterfront, dominating the main water approaches to the CBD.

In order to explain the relevance of the Naga Towers’ design, one must first explain the Symbolism attached to the Naga itself. The Naga, or cobra snake plays an integral part of India’s cultural ethos, philosophies, traditions and religions. The Naga is worshipped in many parts of India as it is considered very sacred. The ancient lore is that the Nagas live in  the underground city called Bhogavati and are considered the protectors of springs, wells and rivers and are believed to bring rain and therefore fertility.

The Naga has always been depicted in indian sculptures as standing up with its spread hood.  The coiled body of the serpant rising represents the symbolic rising of the Kundalini, or spiritual energy. This powerful symbol of the Naga  has been re-interpreted in the commercial-use Naga Towers shown here.

The tower has been completely approved by all governing and oversight bodies and will be constructed in the first phase of the project. Construction is expected to begin later this year, but may be put on hold if more redesigns/upscaling of the project are in the offing.

WHY WAS NAGA WORSHIPPED IN INDIA?

The cobra with it’s spreaded hood, hissing sounds, black forked tongue can stand up and look a man in the eye and scare the living daylights out of him. Yet it is worshipped in India. Why?

The answer is that it was the only way this useful animal that eats rats, frogs, lizards and other snakes, could be protected from being killed by distraugt people  who come face to face with it. Not surprisingly, a superstition exists even today of a curse on the person who kills such a snake and is believed to affect the person even in their next lives unless an elaborate correction pooja is performed. (When Sachin Tendulkar was not performing well for a long period, he was ‘diagnosed as suffering under the curse of a snake’ that he supposedly killed in his last birth.  Whether he believed in it or just to soothe his mind, he went to a famous temple to do a corrective pooja. And he started performing better after that!)

However surprisingly in villages and rural areas, people live in harmony with cobras. They get out of their way and let them be which is something we all should try to emulate.

For more information on buildings/projects designed/executed completed in Gujarat, go to: