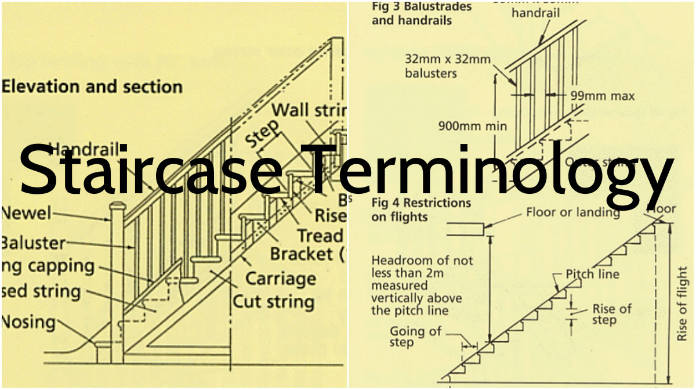 A staircase or simply stairs is a utility construction, designed to bridge a vertical distance, for example between two floors.
Stairway:  This primarily American term is often reserved for the entire stairwell and staircase in combination; though often it is used interchangeably with “stairs” and “staircase”.

Stairwell:  The spatial opening, usually a vertical shaft, containing an indoor stairway; by extension it is often used as including the stairs it contains.
Flight:  A flight is an uninterrupted series of steps.
Closed Stair:  A closed stair has both treads and risers.
Open Stair:  Is a stair that doesn’t have risers. Stairs with open risers are built with only the treads, leaving the vertical spaces between them uncovered. This style is most common in contemporary interiors where the stairway may be freestanding. This design can be dramatic and attractive.
Floating stairs:  A flight of stairs is said to be “floating” if there is nothing underneath. The risers are typically missing as well to emphasize the open effect. There may be only one stringer or minimised  stringers. There may not even be handrails.

There are many technical terms used with Staircases and they can be quite confusing. The terms associated with Stairs have been explained here.

Tread: The horizontal part of the stairs that is stepped on. The tread “depth” is measured from the outer edge of the step to the vertical “riser” between steps. The “width” is measured from one side to the other.
Riser: The vertical portion between each tread on the stair. In some stairs, this may be missing for an “open” stair effect.
Nosing:  In regular stairs, the treads actually overlap each other slightly as seen in the picture above. The nosing is the edge part of the tread that protrudes beyond the riser.
Landing or Platform: The Landing is the flat platform near the top or bottom step of a stair where one lands. An intermediate landing is a small platform that is built between main floor levels, where the stair changes direction. A half landing is where a 180° change in direction is made, and a quarter landing is where a 90° change in direction is made.
Winder Steps: Winders are steps that are narrower on one end than the other as seen in a circular or spiral staircase. They are used to change the direction of the stairs without landings. When three steps are used to turn a 90° corner, the middle step is called a ‘kite winder’ as it looks like a kite.
Stringer, Stringer board or sometimes just String: These are the supports on either side of the treads and risers. There are typically two stringers. ‘Cut’ or ‘open’ stringers are cut to show the profile of the treads and risers from the side. When a stair has a “closed” stringer, the treads and risers are supported by what looks like one straight solid beam running along the bottom of the balustrade.
Spandrel: When the flight of stairs starts from the floor, the triangular space underneath the stairs is called a “spandrel”. It is frequently used as a closet.

Balustrade:  The balustrade is the system of handrail and balusters that prevents people from falling over the edge.
Banister, Railing or Handrail: The angled piece of timber or steel you hold on to as you walk up or down the stairs. The term “banister” is sometimes used to mean just the handrail, or sometimes the handrail and the balusters or sometimes just the balusters.
Balusters:  A term for the vertical posts that hold up the handrail, usually decorative, and in wood or steel. Sometimes simply called guards or spindles.

Newel Post:  A Newel post is the larger baluster or post at the start and the corners of a stair, used to anchor the handrail. For open landings, a newel may extend below the landing for a decorative newel drop.
Starting step or Bullnose:  In regular staircases, the first step at the base of the stair may be wider than the other steps and is called a Bullnose Step. Besides the cosmetic appeal, wider starting steps allow extra space for a big Newel post to which the handrail is fixed.
Runner:  Carpeting that runs down the middle of the stairs. Runners may be directly stapled or nailed to the stairs, or may be secured by a specialized bar that holds the carpet in place where the tread meets the riser, known as a stair rod.
Trim:  Trim is normally applied where walls meet floors and often underneath treads to hide the reveal where the tread and riser meet.

Volute:  A handrail end element for the bullnose step that curves inward like a spiral.
Gooseneck:  The vertical handrail that joins a sloped handrail to a higher handrail on the balcony or landing is a gooseneck.
Rosette:  Where the handrail ends in the wall, it may be trimmed by a rosette.
Core rail:  Wood handrails often have a metal core to provide extra strength and stiffness, especially when the rail has to curve against the grain of the wood. The archaic term for the metal core is “core rail”.
Finial:  A decorative cap to the top of a newel post, particularly at the end of the balustrade.

Baserail or Shoerail:  For systems where the baluster does not start at the treads, they go to a baserail. This allows for identical balusters.
Fillet:  A decorative filler piece on the floor between balusters on a balcony railing.
Handrails may be continuous (sometimes called over-the-post) or post-to-post (or more accurately “newel-to-newel”). For post-to-post systems, the newels project above the handrails.
Handrail Scroll:  The decorative handrail piece at the start of the stair that curls around and sits above the bullnose step.
Handrail Wreaths:  The sections that curve around corners to form a continuous handrail.
Tread Bracket:  A decorative design placed on the cut stringer. 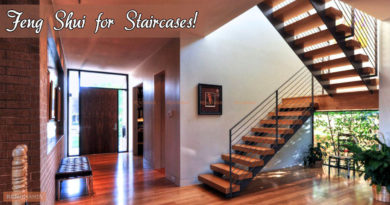 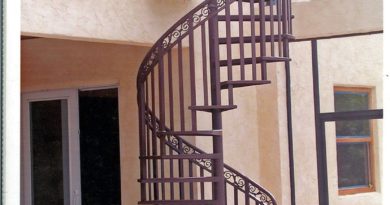 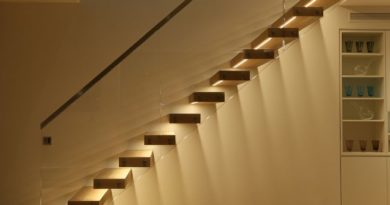