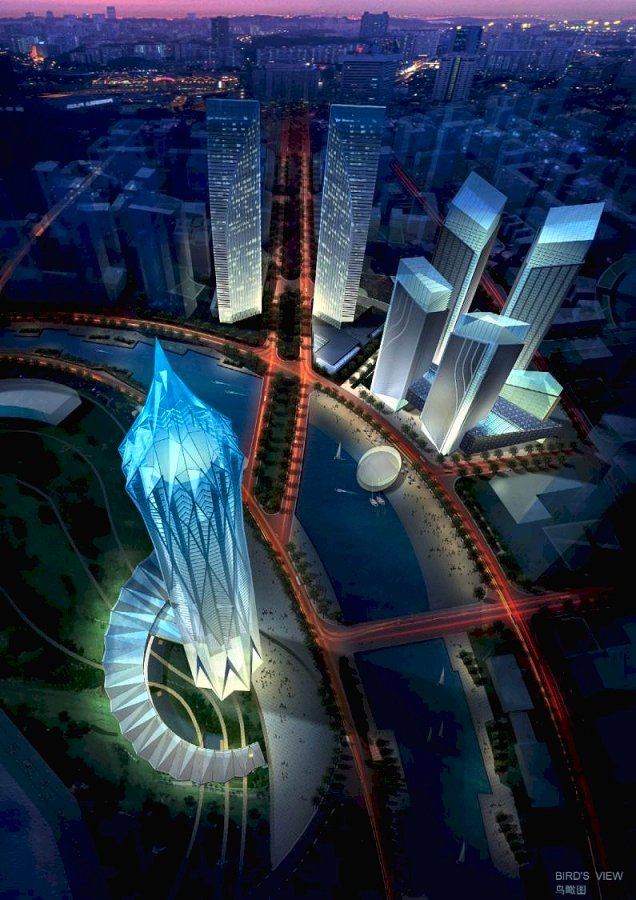 Before I describe the Diamond Tower, its necessary to give some information on the GIFT project.The picture shown below is that of the proposed Gujarat International Finance Tec-City (GIFT), which will be one of the world’s largest and most modern financial hubs. The site is located at Gandhinagar, the capital city of the industrial Indian state of Gujarat and near the state’s commercial capital, Ahmedabad. In addition it’s strong proximity and infrastructure connectivity with Mumbai ensures that mutually beneficial development occurs between the two metros.When completed, GIFT city will be at or above par with presently acknowledged global financial centers such as Shinjuku (Tokyo), Lujiazui (Shanghai), La Defense (Paris) and Dockyards (London). Size-wise too, at over 75 million sq. feet of office space, it is almost twice the size of Shinjuku, Luijiazui, La Defense and Dockyards combined!

The scale of GIFT is singularly massive, unparalleled in the world except for a handfull of Dubai megaprojects. GIFT-City will have 312 tall buildings — the tallest being the signature Diamond Tower with 87 floors; another 40 buildings with more than 50 floors and many more with 24 plus floors of height. The entire project is not only fully approved but already completely sold out due to  the high demand. Construction will begin later this year.

For more information on GIFT as a whole, check out GIFT CITY.

Designed by ECADI Architects, the master planners of many of Shanghai’s newest projects, the Diamond Tower was designed as the centerpiece signature tower that will stand out in the  new GIFT skyline. The Diamond Tower is a tribute to Gujarat, known as the ‘diamond capital of the world’. It takes its design cues from the cut facets of a traditional Indian-cut diamond and is a salute to the state’s diamond industry, which had initially fueled much of Gujarat’s industrialization and still remains a huge economic stimulus to the state.

The Diamond Tower is designed to convey both the brightness and the shape of a diamond. The various cuts and facets in the tower are designed to reflect and refract the light similar to a cut diamond, helping it achieve its goal of being one of the world’s brightest and most eye-catching towers when it catches the sunlight.

It is the only tower located on block D, that is on Fortune Island, which also will have a huge waterfront public green space as well as a museum and convention center. The tower will be accessible both by foot on a bridge spanning the river as well as by GIFT’s public transport system.

The tower has been completely approved by all governing and oversight bodies and will be constructed in the first phase of the project. Construction is expected to begin later this year, but may be put on hold if more redesigns/upscaling of the project is in the offing.

The Diamond tower actually went through a major design change from its initial proposal. Initially, the tower was far more shard-like and sculpturesque in its form, and at 80 floors rose significantly higher than the surrounding skyline. However, after the office space of the original GIFT master plan completely sold out less than a week after its opening the developers realised that they had severely underestimated the demand for high-quality commercial development in Gujarat. Thus, all the buildings went through a major re-design, scaled upward in both area and in height — the signature Diamond Tower being no exception.

After sifting through several proposals by ECADI, the private-public development consortium finally chose the new design of the Diamond Tower which is significantly taller, with 87 floors and a 400 meter height. The impression the tower gives is that of a rock-solid jewel rising over a much more aggressive and massive skyline, rather than the delicate crystal shard complementing a visually delicate skyline of the older design plan.All pictures in this article are courtesy ECADI Architects and GIFT.

For more information on buildings/projects designed/executed completed in Gujarat, go to: